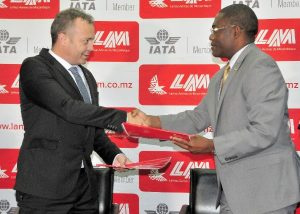 Mozambique’s Linhas Aéreas (LAM) and the private company Fastjet will share passenger planes, they announced after signing a memorandum of understanding on Tuesday.

“The memorandum will cover different partnerships such as ‘code sharing’,” LAM said in a statement. Code-share allows for a trip purchased with one company to be made on a plane owned by another.

The Mozambican state-owned company has been experiencing frequent delays due to lack of airplanes and resources, reflected in a crisis over fuel payment difficulties which worsened dramatically earlier this month.

Fastjet started operations in the Mozambique domestic market in November under the holding certificate of Solenta Aviation, its main shareholder.

LAM’s CEO António Pinto believes that the agreement signed on Tuesday will “strengthen the public company and promote tourism,” he says in the statement, while Fastjet Executive Chairman Nico Bezuidenhout that “this approach to commercial cooperation is the first of its kind on the African continent”.

“Fastjet is committed to exploring and leveraging the agreement to the best-benefit of both companies and, ultimately the people of Mozambique,” he added.

The memorandum also provides for other forms of “inter-airline agreement, such as optimized network synergies in common destinations to accommodate the same, as well as cooperation on other commercial systems such as cargo, engineering and maintenance”.

No specific figures regarding the agreement were disclosed.

A codeshare agreement, also known as codeshare, is an aviation business arrangement where two or more airlines share the same flight. Sharing, in this sense, means that each airline publishes and markets the flight under its own airline designator and flight number as part of its published timetable or schedule.

A seat can be purchased on each airline’s designator and flight number, but is operated by only one of these cooperating airlines, commonly called the “operating carrier” or more precisely (and in line with definitions in IATA Standard Schedules Information Manual): “administrating carrier”. The term “code” refers to the identifier used in flight schedule, generally the two-character IATA airline designator code and flight number. Thus, XX123 (flight number 123 operated by the airline XX), might also be sold by airline YY as YY456 and by ZZ as ZZ9876. Airlines YY and ZZ are in this case called “Marketing airlines” (sometimes abbreviated MKT CXR for “marketing carrier”).