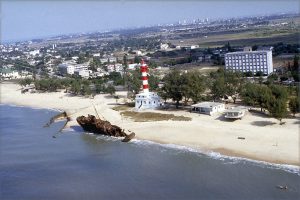 Former Dutch tug, now a breakwater in front of the lighthouse SE of Beira. Built in 1953 by the N.V.Scheepsbouw Unie Groningen. (1994)
Built in

Beira is the third largest city in Mozambique. It lies in the central region of the country in Sofala Province, where the Pungwe River meets the Indian Ocean. Beira had a population of 412,588 in 1997, which grew to an estimated 546,000 in 2006.

Beira is Mozambique’s second largest city (after Maputo) and an important port. Known as the ‘heart of Mozambique’ it is situated halfway up the coast in Sofala province at the mouth of the Púngoè River.

It is also the end of the oil pipeline and railway to Zimbabwe (distance to Harare is 600km, and distance to Johannesburg is 1 800km).

Although run down and neglected, the buildings have a Mediterranean style and the infrastructure of the city is being re established after years of neglect and abuse. The centre of the city is much more compact than Maputo and can be very confusing since most of the street signs are missing. No one really knows the streets by their names and thus interpreting directions from locals is not always easy.

The city square (Praça) is in the heart of the city and is surrounded by shops, banks, supermarkets, post office, telephone, travel agency etc. On the southeast side of the square is the marble municipality building that has a tile mural of the historical Sofala Castle in its entrance hall.

The cathedral erected in 1925 is partially built of stone from the sixteenth century Fort of Sofala (which since disappeared under the sea). Situated south east of the city centre and once a brilliant white building, it is now looking a little run down.

Casa Portugal is a house built in a typical colonial style. It is located near the Praça do Metical. Another house with superb architecture is the Casa Infante de Sagres found in the Largo Infante Sagres. The ruins of the (former) Grand Hotel are near the mouth of the Púngoè River. Goats in the lobby and trees growing on the balcony make envisaging its former grandeur difficult.

Nine kilometres from the centre of Beira north along the beach road is the red and white lighthouse, and the shipwrecked Macuti. The palm lined Praia de Macuti is north of the lighthouse and is the most popular beach. The old part of the port contains the ship graveyard on the banks of the Púngoè River and is worth a visit.

The artists of the Makonde tribe in the north produce quite detailed and bizarre carvings known as ‘torture art’ – their wares are not cheap since their main market has been the well-paid aid worker of Beira and Maputo. Various nightclubs and cinemas provide several entertainment options – and there are a range of eating and drinking venues.

In the area surrounding the city is a resort called ‘Six Miles’ situated inland about 10 km from the city centre. There is an artificial swimming lagooncomplete with islands as well as pedal boats for hire.