Nampula is the capital city of Nampula Province in northeastern Mozambique. It has a population of 471,717, making it the third largest city in Mozambique after Maputo and Beira. 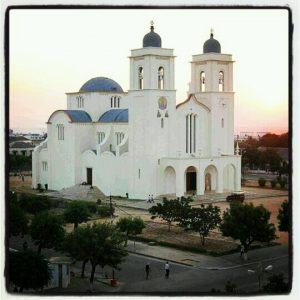 I had to chuckle at a Trip Advisor review for Nampula’s cathedral.  A pre-trip Google search of things to check out on my holiday found another traveler’s description of the Catedral de Nossa Senhora da Fatima: “great…if only there was something else in Nampula”. This list is an attempt to show the other options.

The cathedral is certainly worth a visit, although it won’t take long.  The clean exterior of the building sets it apart in the middle of a chaotic and dirty city, but the inside offers nothing more than a modern church interior.  For a harried traveler, however, the calm and quiet pews might offer the moment of peace you’ve been looking for.

The Museu Nacional de Ethnologia is a highlight for Nampula as well as for the entire country of Mozambique. A leisurely stroll through the exhibits won’t take more than thirty minutes, but this collection of cultural artifacts is well maintained and includes Portuguese and English interpretive panels.  This museum is hands-down winner for the “Most Informative and Interesting” prize of all the museums I visited in Mozambique.

After visiting the museum, pop into the museum’s backyard to check out the Makonde Collective.  This group of local artists makes and sells an excellent collection of traditional carvings, jewelry, and some clothes and woven baskets.

4.  Check out the market

While the Nampula municipal market isn’t as large and chaotic as markets in some other Mozambican cities, it does have the most extensive selection of live chickens that I saw at any market in the country. That alone, in addition to the market’s mountains of fresh produce, earns it a place on this list.  Find it on Avenida de 3 de Fevereiro.

Long an institution on Ilha de Moçambique, Ruby Backpackers has opened a location in Nampula in the last year.  Two dorms and two private rooms are tucked into a cosy house only a ten minute walk from the train and chapa stations.  Even if you’ve booked accommodation elsewhere in Nampula, their lovely wrap-around porch provides a tantalizing place to spend your afternoon with an ice-cold beer from the friendly bar.  Find them on Avenida Daniel Napatima, just off Avenida de 3 de Fevereiro.

It seems a bit ridiculous to include a shopping centre in a list of key attractions, but there you have it: Nampula doesn’t have a ton on offer.

The Centro Comercial on Avenido Eduardo Mondlane, occupying the ground floor of Hotel Girassol Nampula, has a fantastic coffee shop, the best bookstore in town, a reliable internet café for sending “I’m still alive in Mozambique” emails to friends and family, and a well-equipped computer store to re-stock memory cards for your camera.

If you’re not in Mozambique to eat, what on earth are you doing there?

In northern Mozambique, there’s one other important delicacy to check out.  Look for Frango Zambeziana (Zambezia chicken) on the menu of any local restaurant; this tasty northern dish is a nice alternative to Mozambique’s standard piri-piri flavour.

Nampula is most frequented as a stopping point on the way to other places: if you’ve come from southern Mozambique, continue north to Pemba, Ibo, and the Quirimbas Islands.

My top recommendation out of Nampula is directly east: Ilha de Moçambique, only a three-hour chapa ride away

The brave and adventurous traveler will buy a ticket for the train west; this trip is reputedly one of the most uncomfortable train journeys but bestows great travel bragging rights, and it’s an easy way to head from Mozambique to Malawi.  The train travels directly from Nampula to Cuamba, at which point buses are waiting to take you to one of several border posts.