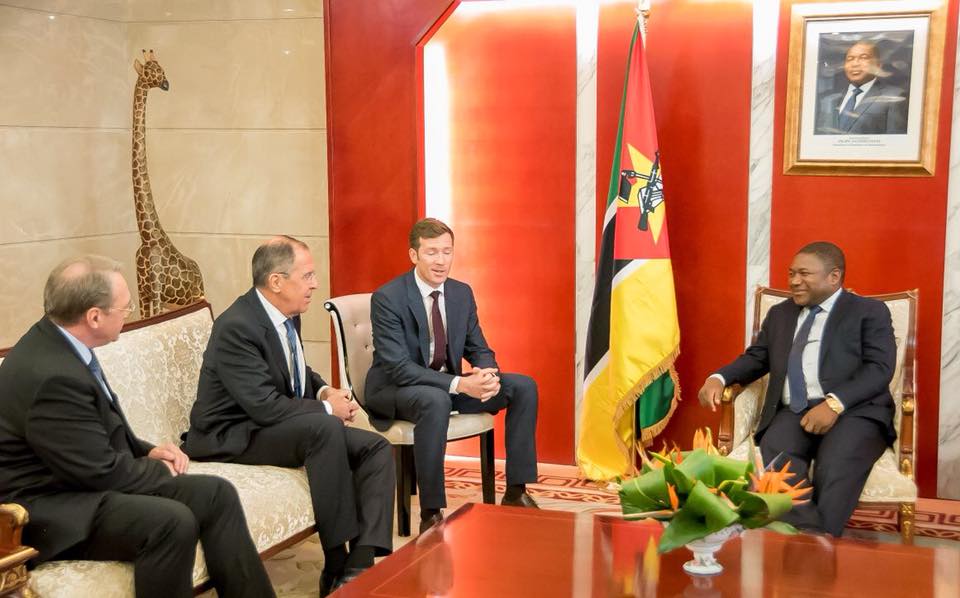 Russian Foreign Minister Serguei Lavrov announced in Maputo on Wednesday that the Russian company Rosneft, one of the largest oil and gas companies in the world, hopes to begin exploring for natural gas off the central and northern Mozambican coast in the near future.

He was speaking at a press conference after a working meeting with his Mozambican counterpart, Jose Pacheco, and a courtesy call on President Filipe Nyusi.

Rosneft is a partner of the US company ExxonMobil and Mozambique’s own National Hydrocarbon Company (ENH) in three offshore blocks that were awarded during the Fifth Licensing Round held by the National Petroleum Institute (INP) in 2015.

Two of the blocks are in the Zambezi Delta, in the centre of the country, and the third is near the small port of Angoche, in the northern province of Nampula. In all the blocks ExxonMobil has a 60 per cent stake, Rosneft 20 per cent and ENH the remaining 20 per cent.

Asked whether this consortium is about to break up, due to the political differences between Washington and Moscow, Lavrov said his information is that the consortium is regularising its legal status so that it can start its work in Mozambique.

The consortium was drawing up its terms of reference, he said, and he expected technical questions to be discussed during a meeting in April in Maputo of the Mozambique-Russia joint bilateral commission.

If there were any disagreements between ExxonMobil and Rosneft, these should be discussed in the first place between the members of the consortium, said Lavrov. “We defend the principle that economic interests should not be influenced or affected by political questions”, he added. “Let us see how the economic interests of the companies will or will not be affected by the political positions of the United States government”.

Lavrov defended the Russian intervention in Syria in support of the Assad regime, and claimed the rebel groups opposing the regime are “terrorists”.

He claimed that Russia favours a political solution to the Syrian conflict. “Together with our partners, Iran and Turkey”, said Lavrov, “we have promoted discussions between Syrian groups in Sochi, in Russia”.

“We have a common position with our Mozambican partners”, he continued, “that the global priority is to create a single front in the struggle against terrorism, and to do this without any double standards, and not by using the fight against terrorist groups for geostrategic and geopolitical purposes”.

Pacheco said that Mozambique too respects the separation of economic from political interests. “Mozambique is open to working with Russia in energy and hydrocarbons”, he declared.

In the 1970s and 80s, the Soviet Union was a major partner of Mozambique and provided large amounts of military support. This, however, came to an end with the dissolution of the Soviet Union.

Lavrov said that Russia is willing to resume military cooperation with Mozambique, but this time the mission would be “to fight against terrorism”.

During the press conference, Pacheco revealed that a delegation from the Russian bank VTB had recently been in Maputo to discuss the debts to VTB illegally incurred by the Mozambican security-related companies Ematum (Mozambique Tuna Company), Proindicus and MAM (Mozambique Asset Management). VTB lent MAM 535 million dollars, Ematum 350 million and Proindicus 118 million.

The loans were illegally guaranteed by the previous Mozambican government, headed by President Armando Guebuza. VTB, like the other European bank involved in the loans, Credit Suisse, undertook no due diligence of the three Mozambican companies, which are now effectively bankrupt and unable to repay anything.

Pacheco said the VTB delegation had worked with “pertinent sectors” (presumably the Finance Ministry) on a solution.

“This is a technical question which is being worked on in the departments responsible for following this process”, he added.

The position of the Finance Ministry, however, has not changed – it is that Mozambique cannot repay the debts incurred by the three companies, and the creditors must renegotiate the debt.

Pacheco also announced that he has accepted an invitation from Lavrov to visit Russia. One of the purposes of this visit will be to prepare a visit by Nyusi to Moscow. No dates for these visits have yet been fixed.

Lavrov’s visit was part of the Russian minister’s tour of Africa which took him to Angola, Namibia and Zimbabwe. He will now move on to Ethiopia.