Quelimane (Portuguese pronunciation:  is a seaport in Mozambique 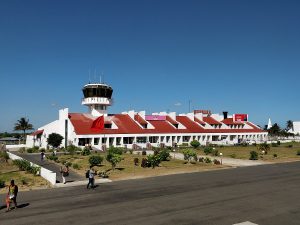 Quelimane (Portuguese pronunciation:  is a seaport in Mozambique. It is the administrative capital of the Zambezia Province and the province’s largest city, and stands 25 km (16 mi) from the mouth of the Rio dos Bons Sinais (or “River of the Good Signs”). The river was named when Vasco da Gama, on his way to India, reached it and saw “good signs” that he was on the right path. The town was the end point of David Livingstone’s west-to-east crossing of south-central Africa in 1856. Portuguese is the official language of Mozambique, and many residents of the areas surrounding Quelimane speak Portuguese. The most common local language is Chuabo. Quelimane, along with much of Zambezia Province, is extremely prone to floods during Mozambique’s rainy season. The most recent bout of severe flooding took place in January 2007.

The town originated as a Swahili trade centre, and then grew as a slave market. Quelimane was founded by Muslim traders (see Kilwa Sultanate) and was one of the oldest towns in the region.

The origins of the name ‘Quelimane’ are obscure. One tradition alleges that Vasco da Gama, in 1498, inquired about the name of the place from some inhabitants laboring in the fields outside the settlement. Thinking he was asking what they were doing, they simply replied kuliamani (‘we are cultivating’).

An alternative explanation is that when the Portuguese reached the settlement, they were welcomed by a notable Arab, or half Arab, who acted as interpreter between them and the natives. The name which the Portuguese applied to this individual, and his settlement, was ‘Quelimane’ (pronounced Kelimãn), because in the corrupt Arabic spoken on the East African coast ‘Kalimãn’ is the word for ‘Interpreter’. In Swahili it is ‘Mkalimani’.